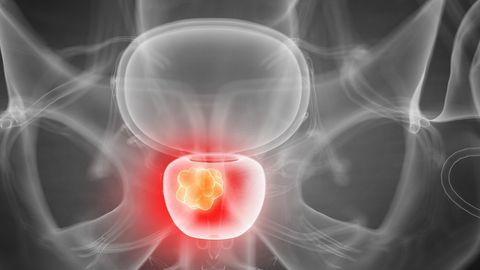 The prostate gland is part of the male reproductive system. The prostate is a walnut-sized exocrine gland. This means that its fluids and secretions are intended for use outside of the body. The prostate produces the fluid that nourishes and transports sperm on their journey to fuse with a female ovum, or egg, and produce human life. The prostate contracts and forces these fluids out during orgasm. The urethra is tube through which sperm and urine exit the body. It also passes through the prostate. As such, the prostate is also responsible for urine control. It can tighten and restrict the flow of urine through the urethra using thousands of tiny muscle fibers.

Prostate cancer is the most common cancer in men. It is treatable if diagnosed early, before it spreads. If symptoms appear, they include problems with urination. Regular screening Is the best way to detect it in good time.

The protein excreted by the prostate, prostate-specific antigen (PSA), helps semen retain its liquid state. An excess of this protein in the blood is one of the first signs of prostate cancer.

How does it start?

It usually starts in the glandular cells. This is known as adenocarcinoma. Tiny changes occur in the shape and size of the prostate gland cells, known as prostatic intraepithelial neoplasia (PIN). This tends to happen slowly and does not show symptoms until further into the progression.

Nearly 50 percent of all men over the age of 50 years have PIN. High-grade PIN is considered pre-cancerous, and it requires further investigation. Low-grade PIN is not a cause for concern.

Prostate cancer can be successfully treated if it is diagnosed before metastasis, but if it spreads, it is more dangerous. It most commonly spreads to the bones.

There are usually no symptoms during the early stages of prostate cancer.

If symptoms appear, they usually involve one or more of the following:

frequent urges to urinate, including at night

blood in the urine

difficulty achieving or maintaining an erection may be difficult

bone pain, often in the spine, femur, pelvis, or ribs

If the cancer spreads to the spine and compresses the spinal cord, there may be:

The exact cause of prostate cancer is unclear, but there are many possible risk factors.

Certain genetic and ethnic groups have an increased risk of prostate cancer.

Studies have suggested that a diet high in red meat or high-fat dairy products may increase a person’s chances of developing prostate cancer, but the link is neither confirmed nor clear.

Some research has suggested that non-steroidal anti-inflammatory drug (NSAID) use may reduce the risk of prostate cancer. Others have linked NSAID use with a higher risk of death from the disease. This is a controversial area, and results have not been confirmed.

There has also been some investigation into whether statins might slow the progression of prostate cancer. One 2016 study concluded that results were “weak and inconsistent.”

It is often believed that obesity is linked to the development of prostate cancer, but the American Cancer Society maintains that there is no clear link.

A doctor will carry out a physical examination and enquire about any ongoing medical history. If the patient has symptoms, or if a routine blood test shows abnormally high PSA levels, further examinations may be requested.

Imaging scans can show and track the presence of prostate cancer.

a digital rectal examination (DRE), in which a doctor will manually check for any abnormalities of the prostate with their finger

If these tests show abnormal results, further tests may include:

a ratio of free PSA to total PSA,

a biopsy, or the removal of 12 to 14 small pieces of tissue from several areas of the prostate for examination under a microscope

These will help confirm the stage of the cancer, whether it has spread, and what treatment is appropriate.

To track any spread, or metastasis, doctors may use a bone, CT scan, or MRI scan.

Staging will take into account the size and extent of the tumor and the scale of the metastasis. At Stage 0, the tumor has neither spread from the prostate gland nor invaded deeply into it. At Stage IV, the cancer has spread to distant sites and organs.

Treatment is different for early and advanced prostate cancers.

If the cancer is small and localized, it is usually managed by one of the following treatments:

Watchful waiting or monitoring: PSA blood levels are regularly checked, but there is no immediate action. The risk of side-effects sometimes outweighs the need for immediate treatment for this slow-developing cancer.

Radical prostatectomy: The prostate is surgically removed. This can be done by either  open surgery or laparoscopic way. Traditional surgery requires a hospital stay of up to 10 days, with a recovery time of up to 3 months.  Laparoscopic surgery is less invasive and  Robotic keyhole surgery involves a shorter hospitalization and recovery period, but it can be more expensive. Patients should speak to their insurer about coverage.

Brachytherapy: Radioactive seeds are implanted into the prostate to deliver targeted radiation treatment.

Conformal radiation therapy: Radiation beams are shaped so that the region where they overlap is as close to the same shape as the organ or region that requires treatment. This minimizes healthy tissue exposure to radiation.

In the early stages, patients may receive radiation therapy combined with hormone therapy for a while.

Treatment recommendations depend on individual cases. The patient should discuss all available options with their urologist or oncologist.

Advanced cancer is more aggressive and will have spread further throughout the body.

Chemotherapy may be recommended, as it can kill cancer cells around the body.

Androgen deprivation therapy (ADT), or androgen suppression therapy, is a hormone treatment that reduces the effect of androgen. Androgens are male hormones that can stimulate cancer growth. ADT can slow down and even stop cancer growth by reducing androgen levels.

Even if the hormone therapy stops working after a while, there may be other options. Participation in clinical trials is one option that a patient may wish to discuss with the doctor.

Radical prostatectomy is not currently an option for advanced cases, as it does not treat the cancer that has spread to other parts of the body.

As the prostate is directly involved with sexual reproduction, removing it affects semen production and fertility.

Radiation therapy affects the prostate tissue and often reduces the ability to father children. The sperm can be damaged and the semen insufficient for transporting sperm.

Non-surgical options, too, can severely inhibit a man’s reproductive capacity.

Options for preserving these functions can include donating to a sperm bank before surgery, or having sperm extracted directly from the testicles for artificial insemination into an egg. However, the success of these options is never guaranteed.

Patients with prostate cancer can speak to a fertility doctor if they still intend to father children.

Regular screening can help detect prostate cancer while it is still treatable.

What is Robotic surgery?

Robotic surgery involves use of the da Vinci robot surgical unit in performing complex surgical procedures such as prostatectomy (removal of the prostate gland usually for cancer) and pyeloplasty (reconstructing urinary drainage system from the kidney). This exciting technology allows the operating surgeon to sit comfortably behind a console and control the robot that is next to the patient to perform surgery.

This exciting technology combines fine dexterity of laparoscopic instruments with 7 degrees of freedom, as well as 3-dimensional visualization for the operating surgeon while allowing him/her to be seated comfortably at a remote console. Consequently, robotic assistance has significantly decreased the learning curve for this technically challenging procedure.

How are Robotic prostatectomy performed?

During the dVP, a telescopic lens is inserted into one of the small incisions. This provides a magnified 3 dimensional view of the delicate nerves and muscle surrounding the prostate, thus allowing optimal preservation of these vital structures. The cancerous prostate gland is dissected free from the bladder and urethra, and the bladder and urethra are sewn together without the surgeon’s hands ever entering into the patient’s body. The prostate is removed intact through one of the small incisions located at the belly button by extending the incision to accommodate the size of the prostate. These small incisions are closed with absorbable suture.

What are the benefits of Robotic prostatectomy?

The da Vinci Surgical System enables surgeons to operate with unmatched precision and control using only a few small incisions. Recent studies suggest that da Vinci Prostatectomy may offer improved cancer control and a faster return to potency and continence.